With miles of coastline, beautiful estuaries, and acres of unspoiled countryside, Cornwall is a haven for many species of birds and mammals. If you’re hoping to see some of the region’s wildlife in its natural habitat, here are the best places to look. 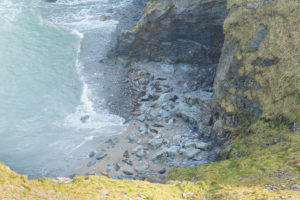 Just a few minutes’ drive from the popular harbour town of Padstow sits Trevose Head – a spectacular headland on Cornwall’s northern coastline. Managed by the National Trust, the headland is a good vantage point from which to spot seals, dolphins, basking sharks, sea birds, and possibly even the occasional whale. During summer months you might get lucky and catch a glimpse of the unusually-shaped oceanic sunfish (the world’s largest bony fish) feeding just below the surface. Take your binoculars with you and be careful to remain on the footpaths while exploring the area – many of the birds attracted to the headland are ground nesting and can be easily disturbed by walkers and dogs.

The Rumps and Pentire Point

Linked by the South West Coast Path, the Rumps and Pentire Point are part of another National Trust-owned headland just a short driving distance from Polzeath. Grey seals can be spotted around the headland throughout the year (keep an eye on the rocks and breaking water at the base of the cliffs) and feeding pods of dolphins (usually bottlenose or common) are a regular sight. Watch out for clusters of seabirds circling or diving into a patch of water – they are looking for fish, and dolphins or porpoises will often join them in their quest for food. Don’t forget to look up as well as down – peregrine falcons frequently patrol the area and can be seen soaring over the headland. You can view the complete headland walking trail here.

A designated Area of Outstanding Natural Beauty stretching between Padstow and Rock down to Wadebridge, the Camel Estuary is a veritable birdwatchers’ paradise. With a number of purpose-built hides, including several along the Camel Trail open to the public, wildlife spotters can spot egrets, cormorants, peregrines, mute swans, and even the occasional kingfisher or osprey. One of the UK’s rarest mammals, the otter, is a frequent visitor to the Camel River, and the area also hosts foxes, newts, rabbits, and squirrels.

A little further along the north coast at Godrevy Head you’ll find a beach called Mutton Cove that is home to a colony of grey seals. At the end of the grassy car parking area, turn right past the toilet block and follow the footpath to the clifftop. If you peer over the edge you should have a bird’s eye view of multiple seals basking on the sand. Make sure you visit at low tide to ensure the beach is there and be cautious when you approach, as seals are sensitive to loud noises. Seal numbers begin to increase every Autumn and are at their highest in January.

Less than a mile from the South West Coast Path, The Point at Polzeath is the perfect holiday location for exploring Cornwall’s stunning clifftop scenery and native wildlife. Visit our website to check availability.