How to read a Surf forecast

Beach Tips – How to Read a Surf forecast

Surf Reports can give a beach user all the information needed about the current surf conditions in a particular area. This is really important for staying safe whilst enjoying Cornwall’s beaches. One of the main questions most beach users have is;

“How big are the waves going to be today?” – This is not always a simple answer as many different factors must be considered that change every minute of every hour each day.

In short there are 3 elements that need to be considered for an accurate forecast:

Longer and stronger winds furthest from land result in large swell heights and periods. Swell Height (commonly measured in ft) is simple to understand. Generally, the bigger the swell height, the bigger the surf will be. Cornwall’s range of swell height can be anything from 0.1ft in the summer months to 35ft+ during the winter storms.

Swell period (measured in seconds) is the amount of time it takes a wave to pass a certain point and therefore the time between each wave. The longer the swell period, the more powerful waves will be. For example, a report may say 2ft at 15 seconds. Even though the wave is only 2ft, it has a 15 second period which means the wave is traveling from a longer distance (fetch). This is also known as a ground swell, and will result in powerful waves.

A 2ft wave at 5 seconds will most likely result in small and weak waves. Short period swells generally mean that the wave was created by a storm close by in shallower waters and has not travelled far enough to gain speed and power. Swells that have a wave height of 8ft and a swell period of 22 seconds are going to be huge! However, an average swell report of 4ft at 12 seconds in Polzeath should result in chest to head high wave faces once they reach the shore. 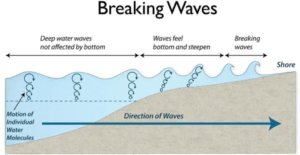 A good solid swell alone does not always translate into good waves locally. A good day for surfing requires favourable local winds. Understanding the difference between onshore and offshore winds goes a long way in understanding how the waves will be once they get to the beach.

Imagine you are standing on the beach facing the ocean with a strong breeze in your face. In other words, the wind is blowing onto the shore – onshore wind. Onshore winds come from behind or from the side of the waves, turning a swell into surf that is bumpy and more difficult to ride. Ideally you want what is known as “clean surf.”

A clean wave is one that is lightly fanned by an offshore wind or no wind at all. These conditions are devoid of surface bumps or chop on the wave face, which allows you a smooth ride. Offshore winds, winds that blow off the shore and into the coming waves, groom waves by lightly holding them up before they break. The only wind better than offshore wind, when swell is in the water, is no wind at all. A swell that is met with no wind results in a glassy day, a day when the surface of the wave resembles glass.

It is worth noting that really strong wind in any direction can make the sea unsafe or unfit for surfing.

The size, quality, speed and very existence of a wave depend on your local tides. That is why you have to factor in the tide cycle to understand ocean and surf conditions at your local beach. Some spots work better at low tide than at hide tide and vice versa. A surf break may be known as a low or high tide spot depending on which tide forms the best-breaking waves.

Beginners take note: just because a spot is known as a low tide break doesn’t mean you can not have fun during high-tide. All it means is that the spot works best at low tide. At low tide, sand bars will be exposed to waves that were too deep for breaking waves during high tide. Other spots work better at a higher tide because sand bars may be too shallow at lower tides. In short, tides affect water depth, which in turn either exposes or hides the ocean floor that is necessary for a wave to break. That is why it is crucial to factor them into the surf equation.

In short, predicting the surf can be a complicated affair! Sometimes it is just best the head down to the beach and check it out for yourself. Lifeguards are always on hand during the summer months here in Polzeath, so if you are unsure then they are always more than happy to help!

Check out the current surf forecast and webcams for Polzeath

This entry was posted in Blog, Holidays. Bookmark the permalink.