A Brief History of Padstow May Day

Padstow’s Obby Oss celebration is one of the oldest surviving festivals in the UK, famous for both its age and its uniqueness. The custom has been carried out by Padstonians over centuries has not been allowed to die out.

The exact origin of the tradition is unknown, and have been blurred in the depths of time but like other festivals during spring it is thought to be connected with the ancient Celtic festival of Beltane held half way between the Spring equinox and Summer Solstice to celebrate the ‘fertility’ of summer.

It’s a day when the town’s inhabitants come together for a boisterous festival of folk singing, dancing (and maybe even a little bit of drinking), accompanied by musicians with accordians and drums. The parade centers around two Obby Osses (Hobby Horses) – the Old (Red) Oss and the Blue Ribbon Oss, both of whom have stables from which they emerge in the morning and to which they return at night. Subtle differences in appearance of the costumes distinguish the two from each other as well as different colour ribbons adorning their masks.

Led by a ‘teaser’ and trailed by crowds of followers dressed in white with red or blue sashes depending on the allegiance, the two main Osses pretend to try to catch maidens as they pass through the narrow streets.

The Blue Ribbon Oss, also called the Peace Oss (a term coined at the end of WW1 in 1919)  is the newer of the two, created in the 19th century by members of a temperance group trying to discourage the over-consumption of alcohol during the proceedings by the Old Oss‘ followers, although many still dispute this. 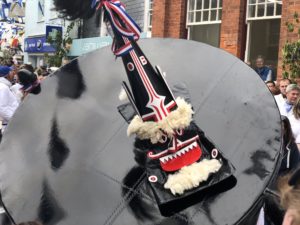 Padstonians from all over the world, return to Padstow to celebrate May Day each year. Some travelling from Australia and New Zealand to mark the occasion, such is the importance to many locals. Some 20,000 – 30,000 people cram themselves into the tiny streets of Padstow to welcome in the summer.

The start of the festival is at midnight on May day eve (April 30th), when local townspeople get together outside the Golden Lion Inn to sing the ‘Night Song’. The town is dressed with greenery and flowers are placed around the maypole in the centre of the town.

Junior Osses emerge from 8am on May 1st where young locals perform the ritual whilst playing the traditional ‘May song’ on accordions and drums.

The main procession begins with the appearance of the ‘Blue Ribbon’ Obby Oss in the centre of town at 10am from the Institute. Followed by the emergence of the Old Oss from the Golden Lion at 11am. The processions are led around town by ‘The Master of Ceremonies’ who dictates the route.

Finally, late in the evening at around 7pm, the two Osses meet for the only time in the day at the Maypole where they dance together and both bands play their music.

Before returning to their respective stables at around 9/10pm the crowd sings of the ‘Obby Oss’ death –  ‘the farewell’, until its resurrection the following May Eve. 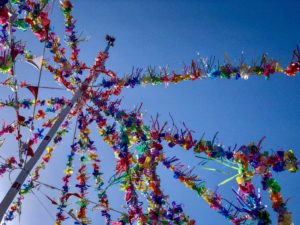 Visitors have many options when it comes to watching the celebrations. As the event attracts many people intrigued in its mystery it is often best advised to arrive in plenty of time.

From The Point a car journey to Padstow takes around 30 mins via Wadebridge. Guests with a car are not advised to drive into the town itself but to park in the park and ride operating at the entrance to Padstow just before Tesco on A389.

Perhaps the easier option for those staying at The Point is the Black Tor ferry from Padstow to Rock which runs every 15-20mins from the beach at Rock. The ferry provides direct access to the harbour and the town centre without the need for a car. More information can be found here. 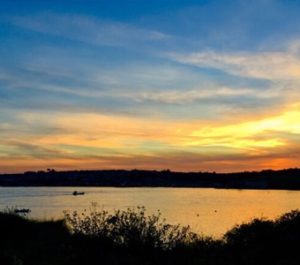 This entry was posted in Blog, Latest News. Bookmark the permalink.