Just a short walk over the public footpaths from The Point is the fascinating Chapel of St Enodoc at Trebetherick. An unlikely location for a place of worship set behind the dunes at Daymer bay on St Enodoc Golf Course. The 12th-century chapel has an interesting history which saw it at one point nearly buried in the sand before being dug out and restored to its former glory.

St Enodoc is one of two chapels in the parish of St Minver and at one time was known as the North Chapel and St. Michael’s in Porthilly was the South Chapel – the main parish church being St. Menefreda in the village of St. Minver.

St Enodoc’s chapel is set in a simply stunning natural landscape, with glorious views towards the bay, and within a short stroll of the Iron Age fort of Brea Hill. The chapel is said to lie on the site of a cave where Enodoc lived as a hermit hence the difficult position of the place of worship itself.

It’s thought by historians that there has been a place of worship on the site since the 3rd-Century. However, no remains this far back have survived the harsh climate. That being said, Roman glass beads have been found in the surrounding, as well as Samian (from the Greek Island of Samos) coins dating back to the 3rd and 4th-Centuries.

The oldest part of the current building dates to the 12th century, with additions in the 13th and 15th centuries. It is laid out with a nave and chancel, a south aisle, south porch, and a north transept. The tower is unusually located to the north of the chapel rather than the more typical west or south. In the tower is a single bell, retrieved from the wreck of the Immacolata, an Italian vessel that ran aground on the Doom Bar. 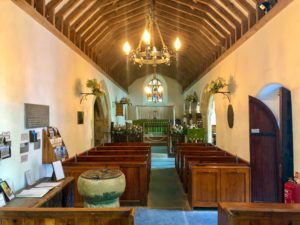 From the 16th – the middle of the 19th century the chapel was virtually buried by sand from the surrounding dunes. The cost of constantly shifting sand away from the chapel became too high and it lay abandoned for several generations. To maintain the tithes required by the church, it had to host services at least once a year, so the vicar and parishioners descended through a hole in the roof to perform the rights to keep the chapel sacred. Evidence of its burial can be seen in the crooked spire. By 1863 it was unearthed, the dunes were stabilized and the building was restored under the supervision of J P St Aubyn and remains largely untouched since.

Sir John Betjeman (1906-1984), Poet Laureate from 1972 until his death, used to spend his childhood holidays at his father’s property in Trebetherick. As a result, he became particularly fond of North Cornwall wrote several poems about St Enodoc and its surroundings (‘A Sunday Afternoon Service at St Enodoc’ / ‘Trebetherick’). He also lies buried in the churchyard. 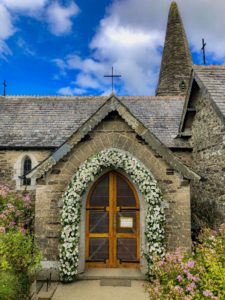 -Opening- Open Daily from 7.30am until dusk.

-Parking- The nearest car park is at Daymer Bay (paying).

Due to the location of the chapel and its breathtaking scenery, it has become a popular place for walkers. St Enodoc is surrounded by footpaths leading from the beaches of Daymer Bay and Rock making it a perfect loop walk. A handy guide of the local area and suggested walks from Polzeath and The Point can be found here.

For those looking for a more challenging walk, the views of the Camel Estuary from the top of Brea Hill to the west of the chapel are especially rewarding.

This entry was posted in Blog and tagged st enodoc. Bookmark the permalink.