Cornwall can be spectacular over the winter months when Atlantic storms buffer our rugged coastline. It’s a dramatic time of year to visit the county and experience the thrilling power of the ocean.

Storm chasing has become an exciting activity for thrill-seeking visitors to the county. It’s an exhilarating day out that is best combined with regular stops at cafés to shelter from the elements but its often hard to know where is safe to go, so we’ve put together our top picks.

Storm watching can be exhilarating but it’s vital to put your own safety first. The winter weather can bring high winds and huge waves, so it’s important to keep a safe distance. Storms in Cornwall can be very dangerous, so check tide times, be cautious and don’t take risks.

Don’t get too close as there are often strong gusts of wind and surges of water that can take you by surprise. Keep well away from the water, preferably from a high viewpoint, or ideally inside a cosy café, bar or even your own car with a view.

Bedruthan Steps is a beautiful stretch of coast to visit at any time of the year but especially when there is a storm raging. Also known by its Cornish name Carnewas, this wide stretch of coast is broken up by a series of rocky outcrops which bear the brunt of crashing waves. The best viewpoints are on the cliff tops (the steps down to the beach are often shut in storms) which have a series of well maintained footpaths along the entire stretch towards Park Head.

There is a National Trust carpark and small tea room making it an accessible option as well as one with some shelter should the elements get too much. Find out more.

An equally impressive storm watching location can be found at Trevose Head near Padstow. This headland juts out into the ocean and it one of the largest headlands on the North Coast. It acts as a magnet for large waves, which crash against the Bull Rock and the Quies and cover the tall lighthouse with curtains of white spray on the cliffside.

There is a large National trust car park with stunning views over Constantine Bay and onwards to Newquay with plenty of footpaths to explore. The perfect place to park up with a hot flask and car picnic. Find out more. 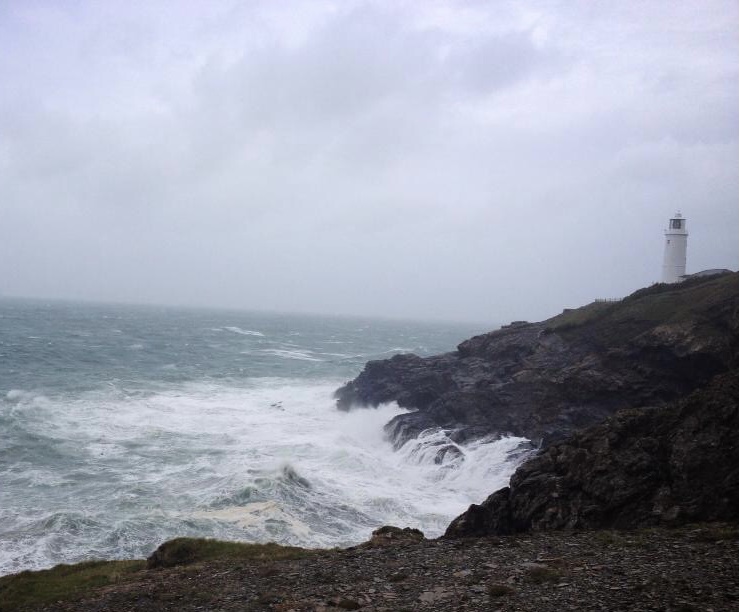 
Both sides of Polzeath offer superb views out into the ocean as waves funnel towards the mouth of the Camel Estuary before unleashing their energy in the bay. With amble parking either side of the beach, plenty of hot drink stops and numerous footpaths its easy to loose yourself watching the waves for hours with the knowledge shelter is only minutes away.

Storm watchers can also safely follow the footpaths around to Daymer Bay where quite often hardy surfers and windsurfers can be found making the most of the more sheltered conditions as the waves sweep into the estuary and break across the Doom Bar.

Situated just outside of Tintagel further up the coast from Polzeath is the tiny coastal hamlet of Trebarwith and its beach. A couple of small car parks are nearby and make for easy access as well as footpaths high up on the cliffs giving some fantastic views.

The West-North-West facing bay is landmarked by Gull Rock and is perfectly angled straight into the face of large Atlantic storms. Those who venture here to view the large waves can enjoy a drink afterwards at the popular Port William Inn and warm up by the fire.